Pop is one of the canon Happy Tree Friends characters. He is Cub's father.

Pop is a light brown bear with a red beret. He is set as a stereotypically clueless, bathrobe wearing, pipe smoking, 1950s style sitcom father. His son Cub often dies as a result of both his attention and inattention. He is not very bright and when he tries to save his son, He often kills him and sometimes himself, too. He has a wife who is Cub's mother but she doesn't appear in the series. 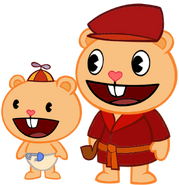