Petunia is one of the canon characters of Happy Tree Friends.

Petunia is a blue skunk in the Happy Tree Friends series. Petunia is best friends with Giggles, and the two often play together in the series. For most of the internet series, she and Giggles had almost identical personalities. When the TV series came out, however, the creators gave her obsessive-compulsive disorder (OCD) and she starts to panic and hyperventilate (complete with paper bag to breathe in) if things are untidy or messy.More specifically, she is a "neat freak" Her love interests are Handy and Mime.

Petunia and Giggles hunting for shells.

Petunia's OCD kicks in and starts to panic.

Petunia is a mess.

Petunia and Handy on a date.

Petunia has to go to the bathroom real bad. 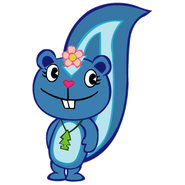 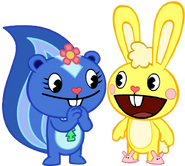 Petunia as a nurse

Petunia and Giggles having a tea party.

Petunia is always cleaning up messes.

She loves taking a shower.

Petunia had an accident. Next time, Petunia should wear a diaper.

How many times did Giggles & Petunia sue Disco Bear for sexual harassment?

Petunia with her flower off. 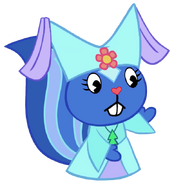