Start a Wiki
Bad Leroy Brown is a character created by TheCoolWikiDude for the HTF Fanon Stories Universe.

Bad Leroy Brown is an evil red skunk with gray stripes and flipped out eyes.He wears a black cape with a dark orange necklace. He is known for causing evil all over Happy Tree Town and tries his best to destroy Splendid. He has a very stinky skunk spray to stun anyone who messes with him or to just give off a very nasty stink sometimes. 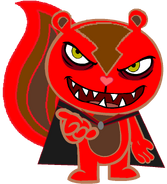 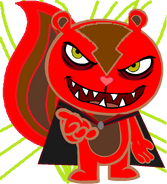 Bad Leroy Brown's skunk spray.
Add a photo to this gallery
Retrieved from "https://happytreefriendsfanonstories.fandom.com/wiki/Bad_Leroy_Brown?oldid=3058"
Community content is available under CC-BY-SA unless otherwise noted.